Visitors will have to wait one more year for the 30th Annual King Ranch Ranch Hand Breakfast. Officials with King Ranch Inc. announced today that the breakfast, a longstanding tradition in South Texas, will have to be postponed due to the ongoing COVID-19 pandemic.

“This event is something that all of us look forward to every year on King Ranch, but unfortunately in the interest of safety we believe postponing it until next year is the right choice,” said Bob Cleek, Area Manager for King Ranch. “In 2019 we set a record with 6,000 attendees. It’s just not prudent to host an event of that size in 2020.”

The Ranch Hand Breakfast is always held on the Saturday before Thanksgiving. Cleek said the 30th Annual Breakfast will now be scheduled for Nov. 20, 2021.

“The La Posada parade and other events associated with that weekend are a huge part of the Christmas tradition in Kingsville,” Morales said. “We evaluated several options for hosting the parade this year, but ultimately we decided the safest option is to wait until next year.”

Although there will not be a parade this year, Morales said the La Posada de Kingsville Committee would be making a donation to the City of Kingsville for downtown Christmas decorations from funds previously given by King Ranch. Last year’s parade had more than 150 entries and drew thousands of onlookers to downtown Kingsville, and Morales said he is looking forward to bringing the parade back better than ever in 2021.

The City of Kingsville is proud to serve as a partner in both the Ranch Hand Breakfast and the La Posada de Kingsville lighted Christmas Parade.  The Kingsville Visitors Center has developed a series of events to recognize the iconic King Ranch’s contributions to our community and provide additional activities to enhance the long-standing traditions of both events initiated by the legendary King Ranch.  In years past, the City of Kingsville Tourism Department has created the Ranch Hand Weekend Tree Lighting, Festival, and Country Concert which benefits a different local non-profit every year.

Last year’s Ranch Hand Weekend Country Concert raised $42,715 for Kingsville Independent School District Education Foundation and would not have been possible without the strong foundation that the Ranch Hand Breakfast has built for decades, said Kingsville Director of Tourism Services Janine Reyes.

“We are saddened to announce the postponement of this year’s events,” Reyes said. “Ranch Hand Weekend is the most anticipated weekend in our city, followed by La Posada de Kingsville, however, the safety of those in our community is paramount and we simply cannot responsibly showcase our charming community to the masses that this top-notch series of events draws.”

The City of Kingsville Tourism Department will utilize the time typically spent to coordinate the event to develop other methods of fundraising that continue to support the community while focusing its efforts on creating a stellar series of 2021 Ranch Hand Weekend and La Posada de Kingsville festivities.

About the Ranch Hand Breakfast

The Ranch Hand Breakfast is held annually on the Saturday before Thanksgiving. The breakfast is the only time of the year when visitors may drive their own vehicles onto the King Ranch. The event features an authentic, hearty cowboy breakfast cooked and served outdoors on the King Ranch. Team roping and old-time cow camp cooking demonstrations are a part of the activities, along with live music and storytelling. The event serves as a fundraiser for the annual La Posada de Kingsville.

La Posada de Kingsville has been a tradition in the town for 30 years. The main attractions include a La Posada procession through downtown, followed by the Parade of Lights. The parade features dozens of floats, each illuminated with hundreds to thousands of lights as they make their way along the parade route. Local high school marching bands and other organizations typically also participate in the parade.

This site uses Akismet to reduce spam. Learn how your comment data is processed. 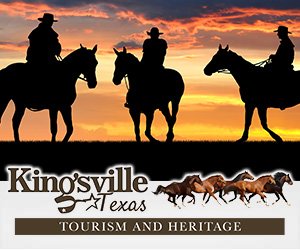